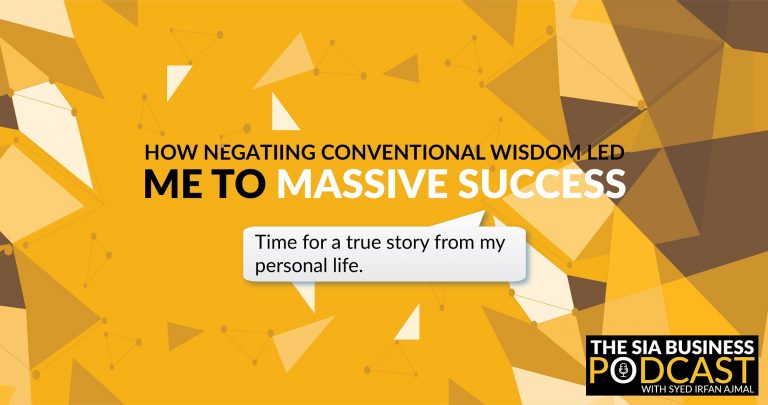 I first assume, this isn’t going to work, and I should stop sending any more pitches.

Then I change my mindset, let go of my fears, my ego, and my presumptions.

THE POWER OF MINDSET + MASSIVE ACTION

Come up with a new plan, after a hard and long look at the facts of the matter, our performance, the quality of our pitches, and what others are doing.

We go on to get some brilliant results.

CHECK OUT THE EPISODE TO KNOW THE DETAILS

WATCH OR LISTEN WITHOUT LEAVING THIS WEBPAGE

OR, USE YOUR FAVORITE LISTENING DEVICE:

INTRO: (00:02) Welcome to the Ask Irfan edition of the SIA Business Podcast. In each Ask Irfan episode, your host, Irfan, will be answering questions you asked and even questions you never asked.

Irfan: (00:22) Hi, Irfan here. Today, I’m trying to experiment with something different. So, what I’m going to do is that I’m going to speak to you, all of you, while I’m driving home from my office. So, let’s see if it works out. And if it does work out, we can call these episodes “Car Talk Episodes”. Hope I am pronouncing that correctly. So, let’s get on with the first Car Talk Episode.

(00:57) What I want to do with this episode, and future [inaudible] episodes, most probably all of them, the ones which I would record while driving my car, is to talk about something more lighthearted. So, maybe not something which is very technical, or which requires a lot of technical jargon, or something like that. So, yeah, let’s try it and see if it’s something that you guys would enjoy.

(01:28) For today’s topic, the one idea that I had in mind, which I’m going to speak about is the importance of mindset. So don’t worry, I’m not going to share any cliches or anything. I mean, almost all of us, I guess, agree… most of us agree that mindset is important, right?

(01:49) But, what I’m going to share is maybe one or two personal experiences where the mindset that I was in, impacted the results and why I keep coming back to the importance of mindset. So, I mean, there is no denying the fact, obviously, that you still have to take action. You still have to show up.

(02:12) I mean, you can’t and just assume that by thinking about all of the best things in your life, you will just achieve them magically. You will still have to take action. Right? So yeah, let’s speak about it.

(02:28) The first instance is, from my recent life, where I was using HARO or HARO, as some people like to call it, which is a tool for reaching out to journalists and pitching story ideas or connecting them to a source. So, I was using your HARO on behalf of a client. And I was actually working on HARO for the very first time.

(03:08) So, I sent all those pitches and the thing is that I never got a response. I mean, no response, no media mentions, no backlinks for the clients, even though that’s what HARO promises that it can do for you. So, I fell into one of those traps where you basically blame someone else for your mistake.​

(03:29) And I was like, “Okay, maybe because I have an odd name, I don’t have an American name, and I’m this Muslim guy and I have this Muslim name, and so, maybe that’s why that is what it was. I was quite convinced that this is the key story.

(03:48) I’m just caught a bit distracted because of some bikers driving very rapidly, and I mean, driving very rapidly and driving in a crazy manner. So yeah, I assumed, maybe it has something to do with… maybe racism or not racism, but because I have this weird name and maybe because I come from a country which has a bad reputation and all that.​

​(04:13) So, maybe that’s playing a major part in me not getting the success that I was expecting. I mean, 40 pitches and basically zero success stories, zero media mentions, or citation, or links. Right? But you know what, what I did after those 40 pitches were that I went back to the drawing boards and I basically… and there is another thing about mindset, which I want to speak about right now.

(04:39) So, before I went back to the drawing boards and did my research, I was pretty sure that everything was all right. Like, more than all right for my pitches. I was like, “I’ve done my studies, I know what it takes to send a good pitch. I know how this works. And even before experiencing HARO, I had a lot of success under my belt.

(05:02) I mean, I have sent pitches before to clients, to large media outlets, and I’ve also written for Forbes Middle East and Business.com and the World Bank Blog and SEM Rush, a lot of large and decent publications, right? So, I was like… I was basically very cocky, I guess. I know it’s kind of overconfident as well.

(05:22) But you know what happened when I went back to the drawing boards and I tried to look for the mistakes that I was making, and I actually made the effort to study what other people were doing with HARO and how their technique and their process was different than mine.​

(05:38) I uncovered a lot of issues with my pitches. My pitches were very long. I was not being very smart with the subject line of my HARO emails. I was… I’m not sure if I was using the regiments or not, probably not. But it was still just a lot because with HARO you can’t… you shouldn’t be sending your pictures as an attachment.

(05:59) The journalists want you to share your pictures with them, your headshot or your client’s headshots but you have to upload them to cloud storage account and then share the URL of that. But anyway, I found a lot of issues. And I also discovered a few tools like Boomerang, which make it easier to send decent pictures.(06:19) So, I went back and in the very next month, I sent 68 pitches… 68 and now get this, out of the 68 pitches, I got 22 backlinks and I got 10 positive replies. So, the reason… what happens with HARO is that in a lot of cases, the publications take a lot of time to publish your response because they are working on… they have a very long content calendar.​

(06:52) Especially in the case of large publications, you can’t expect your article or your mention to get published before, like, two or three months, or maybe even longer sometimes. So, that’s why I counted the 10 replies as part of my success.

​(07:29) Like I said, I thought for a moment that maybe there was this unconscious racism taking place, where my name was something that was maybe impacting the journalists and reporters in a negative manner. I was also being cocky and overconfident because I thought, “Hey, I know everything about sending a good pitch and all that.

(07:53) But as it turns out, when I swallowed my pride and I took the time to really make an effort and study what’s going wrong, I was able to see that there were some pretty serious issues with the kind of pitches that I was sending. And once I took care of those problems, my conversion rate for HARO, my success rate for HARO, it went from 0% for 40 pitches to over 46% for 68 pitches. And that’s just for the first month.

​(08:25) I have continued to use HARO often learned as well. And I’ve been doing pretty well with it. So, that’s it. I am about to reach my house, and I do have a few stories on mindset, but let’s keep those stories for a later time or later episode. I hope you have enjoyed this episode.

(08:46) If you have any true stories when it comes to how our mindset impacts us, do let me know. Maybe I can have you as a guest on the show to share the details of your true story in this regard. Ideally, in fact, your story has to be within the context of how mindset has impacted your ability to be great at business and [inaudible] marketing strategy and all that.

(09:16) So, thank you so much. Speak to you another time. Take care. And if you like these lighthearted conversations that I’m thinking to do with you while I’m driving, you let me know. Thank you so much. Bye-bye.

OUTRO: (09:40) Got any questions about content marketing, SEO, startups, or something totally different, or weird, or fun? Share them with us and we will answer them in the next Ask Irfan episode.​

If you have any questions or if you would like me to interview any entrepreneurs or digital marketers, please contact me here.

FIND MORE ABOUT US

THIS EPISODE WAS BROUGHT TO YOU BY YOUR HOST ⬇️ 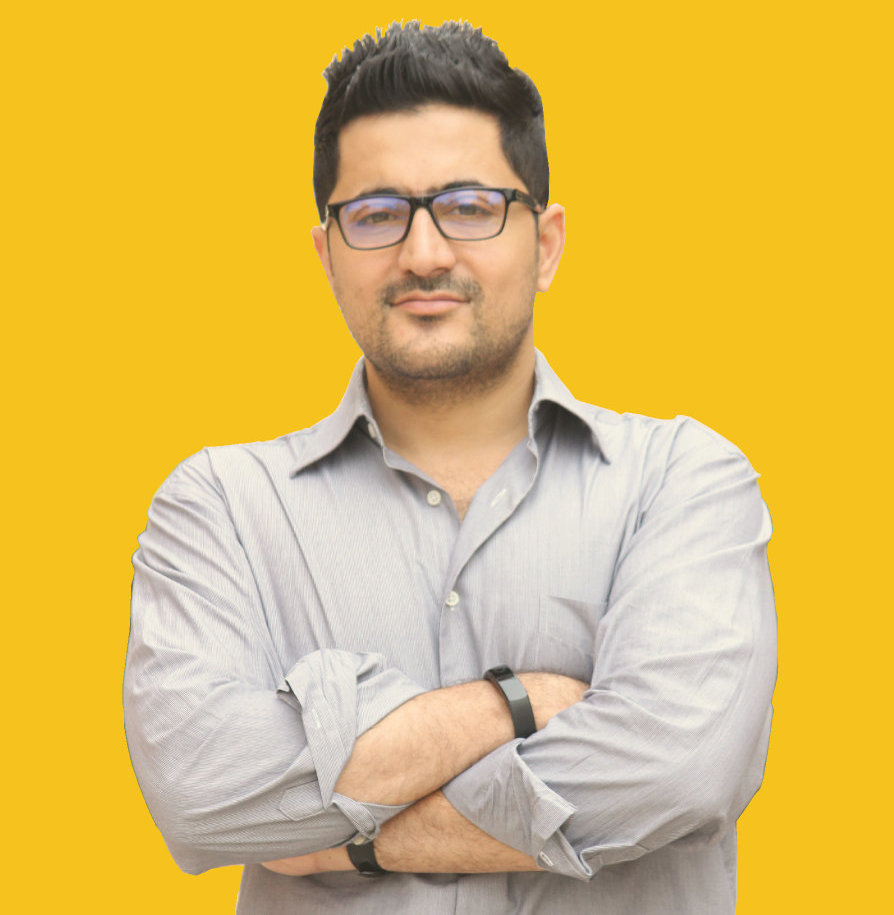 Syed Irfan Ajmal is an award-winning serial entrepreneur and a seasoned digital marketer. He is an international speaker, and speaks and conducts trainings at various organizations and events of Pakistan and UAE. Moreover, he also writes about entrepreneurship and digital marketing for various large publications of the USA, UK, Canada, and Pakistan including Forbes ME, the World Bank, Huff Post, Business.com, Virgin, and others.